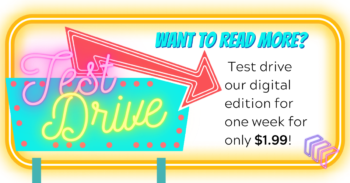 Enjoy this great story from our current issue, then take a test drive to see how you can have full digital access for less than a cup of java! There’s something about the songs of rock superstar Jon Bon Jovi, with lyrics such as “freedom was a tank of gas…to drive, just drive,” that has always felt like a road trip set to music. And now there’s another reason to air guitar in your car—especially if your travel plans take you through New Jersey.

A Garden State Parkway rest area, at milepost 123 in South Amboy, has been renamed in Bon Jovi’s honor, thanks to a collaboration between the New Jersey Turnpike Authority and the New Jersey Hall of Fame.

Sayreville, New Jersey—The Jon Bon Jovi Service Area has all the conveniences of a typical rest stop—restaurants, bathrooms, gas—in a setting that feels like you’re visiting Jovi at home. There’s a framed platinum record from the artist’s personal collection, commemorating a million copies sold of Bon Jovi’s 1987 mega-smash album Slippery When Wet. There are also banners adorned with inspirational quotes, a gigantic lit-up guitar, and a life-size hologram of Bon Jovi himself that talks and answers big questions, such as whether it is etiquette in North or South Jersey to put ketchup or mustard on pork roll.

The plaza is one of nine Garden State Parkway rest stops to be named after Jersey’s famous sons and daughters. Others will soon include the Whitney Houston Service Area near Union, New Jersey; the Toni Morrison Service Area at Ocean View; and the Frank Sinatra Service Area in Galloway. (And, fun fact, Frank Sinatra was actually Bon Jovi’s great-uncle on his father’s side.)

The Jon Bon Jovi Service Center is two miles from Bon Jovi’s childhood home —16 Robinhood Drive in Sayreville— where the singer also lived as an adult while his band was recording its first three records. Between those walls, Jon Bon Jovi wrote his band’s first No. 1 hit song, “You Give Love a Bad Name,” which is featured on that same platinum record on display at his eponymous rest stop.

New Jersey First Lady Tammy Murphy says she hopes the service area “inspires the next Jon Bon Jovi.” But even if it doesn’t set you down the road toward rock ’n’ roll stardom, it will allow you the chance to answer an over-tired kid, who’s asked for the hundredth time how much longer the road trip will be, by singing, “Ooooooh, we’re halfway there! Take my hand, we’ll make it I swear!”
—Eric Spitznagel

The rest stop is near Sayreville, the Jersey borough where the future rocker was born and raised

Photo of the Week brought to you by: Alleghany Highlands of Virginia

Find peace and relaxation in the breathtaking naturescapes that Cape County has to offer. You’ll truly be at one with nature in one of our many lovely hiking & biking trails or historic outdoor locations. Get here for your fall escape.

Photo of the Week brought to you by: Heritage Corridor Convention & Visitors Bureau
Flock to the Rock to enjoy the beauty and majesty of the Starved Rock State Park area.  The park was voted the number 1 attraction in Illinois, and is surrounded with great stores, amazing dining, and even majestic wildlife.
Visit flocktotherock.com for more information.

Photo of the Week brought to you by: Virginia State Parks
Near Mount Rogers and Whitetop Mountain, Virginia’s two highest mountains, Grayson Highlands State Park offers scenic views of alpine-like peaks more than 5,000 feet high. The park offers a visitor center, campgrounds and hiking trails leading to waterfalls and overlooks. Scenic horse trails and a horse camping area with electric and water hookups, stables and parking for trailers are available. The park provides year-round access to the Appalachian Trail and the Virginia Highlands Horse Trail. Find more information and plan your visit at:  amroad.net/VAStateParksPOTW

Photo of the Week brought to you by, Virginia State Parks
A traditional family park since 1936, Douthat is one of the original six Virginia State Parks and was named one of the top 10 state parks in the nation. Nestled in the Allegheny Mountains amid some of Virginia’s most breathtaking mountain scenery, visitors enjoy a 50-acre lake stocked with trout, 4 miles of stream fishing, a sandy swimming beach with snack bar, boat rentals, cabins, and more than 43 miles of hiking, mountain biking and bridle trails. Plus, there are playgrounds, an amphitheater, picnic areas, tent and trailer camping, and a restaurant overlooking the lake. Douthat State Park, along with the other 37 Virginia State Parks, is a perfect place to view beautiful fall foliage. For more details go to: dcr.virginia.gov

Did you know Cottage Grove, Oregon is the Covered Bridge Capital of the West? Explore a few during the sweet Spring season!
Learn more and plan your visit.

Photo of the Week brought to you by: Virginia State Parks

Once owned by President Thomas Jefferson, the 215-foot tall Natural Bridge is a limestone gorge carved by Cedar Creek. Natural Bridge State Park is much more than the natural wonder. Beautiful forests, open, rolling meadows, and vistas of surrounding mountains and the James River valley display nature’s splendor. Access these via 6 miles of hiking trails, including the accessible Cedar Creek Trail that leads from the bridge to the Monacan Indian Village and Lace Falls with its 30-foot cascade. Living history programs connect you to the past and explain how people once used the area’s resources for survival and inspiration. Start at the visitor center where you will find exhibits and a gift shop. Find more information and plan your visit: http://www.amroad.net/VAStateParksPOTW

Photo of the Week brought to you by: Heritage Corridor Convention and Visitors Bureau