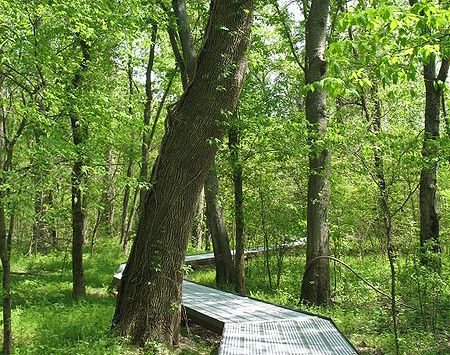 This entry in the "For Namesake"[1] Blog is about the town of New Madrid, Missouri. Incorporated in 1808 It is believed to be the oldest town west of the Mississippi River, albeit it is not too far west. It has an interesting history. A series of strong earthquakes that nearly destroyed the entire region began 202 years ago this December.

New Madrid, Missouri is a town of 3,116 located in New Madrid County along US Route 61/62 in the southeastern corner of the state. It lies on the Mississippi River, about 40 miles southwest of Cairo, Illinois. It is the county seat of New Madrid County. Interstate 55 passes to the north and west of New Madrid. The closest universities are Southeast Missouri State University in Cape Girardeau and a campus of the University of Tennessee at Martin, Tennessee.

Francois and Joseph LeSieur, Canadian trappers, who came to the area to hunt and trade with the Indians living in the region, made the first settlement at the site of what would become New Madrid in 1783. They named their village L’Anse a la Graise which means “cove of grease”, most likely referring the abundance of game in the area. The Spanish gave Colonel George Morgan a grant of land that included this region. He promised to populate the region and dreamed of founding a great city that would be the capital of a principality. He traveled to this spot in 1789, and had the land surveyed for a grand village that he named New Madrid, after the Spanish capital city. His detailed plan called for wide streets with specific areas set aside for parks, churches and schools. To entice settlers to move there he promised to give the first 600 settlers’ half-acre city lots and five acre outlying lots for the sum of $1, if they would build a home and reside there for one year. His plan worked and the town of New Madrid was born. [2] It was formally incorporated in 1808 and is believed to be the oldest city west of the Mississippi. In December of 1811 the first of a series of great earthquakes, three of which reached a magnitude of eight on the Richter scale, struck the region. The quakes were so numerous and severe, it was said that by the end of the winter of 1812, only a few houses within 250 miles of the Mississippi River and the town of New Madrid remained undamaged. [3]

Cairo, Illinois, another Namesake town, is located 40 miles to the northeast of New Madrid, along the Mississippi River.