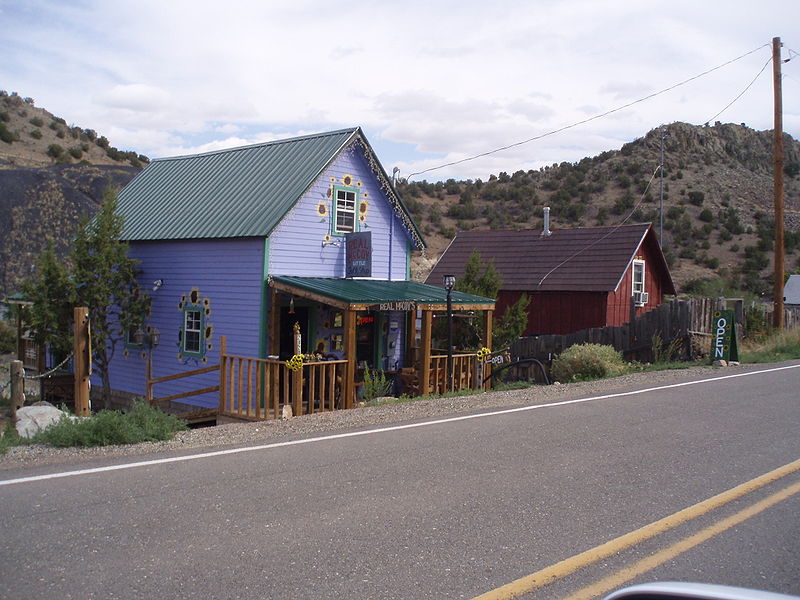 This entry in the "For Namesake"[1] blog is about Madrid, New Mexico. Madrid, once a company coal mining town, was famous from the 1920's to the 1940's when miners would light up the winter sky with some 150,000 Christmas lights powered from the company's coal fed generators. Today this tradition has been revived with the town being lit again by its artisans and shop owners. Explore the Christmas events and all there is to see and do in Madrid at http://www.visitmadridnm.com

Madrid is in the mineral rich Ortiz Mountains. It is the oldest coal mining region in New Mexico, with evidence of mining activity as early as the mid 1850’s. By 1892 the yield was such that a 6.5-mile standard gauge railroad spur was constructed from the valley there, then called “Coal Gulch”, to the main line of the Santa Fe Railroad. By 1899 all coal production in the area was consolidated there and Coal Gulch had become Madrid. It is believed to have been named for a family of settlers. It became a boomtown of about 2,500 persons. To provide homes for the miners and their families, cabins were dismantled in Kansas, shipped by rail and reassembled. In 1919 Oscar Joseph Huber was hired as fulltime superintendent of the mines. He was instrumental in turning Madrid into a model company town, with a company store, fully equipped hospital and good schools. He formed an Employee’s Club that required every miner to donate from .50 to $1.00 per month for community causes. They were also required to participate in town events such as the Fourth of July celebration and the now famous Christmas Light Displays. This lasted from the 1920’s to the 1950’s when the mines closed. In the 1970’s Oscar’s son, Joe Huber, began renting the miner’s cabins to artisans. This trend converted Madrid into what it is today, a small village with a quiet residential area, and a busy main street filled with merchants and art galleries. A recent source for income for the village has been in supplying granite slabs for countertops. Like most of the communities in Santa Fe County, Madrid is a Census Designated Place (CDP). [2] [3]

In Madrid itself you may visit the Old Coal Mine Museum and the famous Mineshaft Tavern. The ending of the 2007 film “Wild Hogs” was set and filmed in Madrid. Nearby Cerrillos, has the Turquoise Mining Museum & Petting Zoo. Twenty-four miles south, along the Sandia Crest National Scenic Byway, you do not want to miss seeing the quirky Tinkertown Museum. [4] The capital city of Santa Fe is also a must stop, and offers much to see and do. Sites of architectural or historic interest include the Barrio De Analco Historic District, Cathedral Basilica of Saint Francis of Assisi, Loretto Chapel, Palace of the Governors and San Miguel Mission. Santa Fe is considered to be the second largest art center in the United States after New York City. The highest concentration of galleries is along Canyon Road, east of the downtown Plaza. There are also many Sculptures located throughout the city. For the performing arts there is the Lensic Theater where dance, music and opera productions are held on a regular basis. Museums include the Georgia O’Keeffe Museum, Institute of American Indian Arts, Museum of Indian Arts & Culture, Museum of International Folk Art, New Mexico History Museum, New Mexico Museum or Art and the Wheelwright Museum of the American Indian. Check the Santa Fe Convention and Visitors Bureau web site for complete information on all of the city’s attractions. [5]

There are two state parks in the Madrid area; Cerrillos Hills State Park and Hyde Memorial State Park. Rafting is available on the nearby Rio Grande River. You may take a tramway to the top of Sandia Peak, in the Cibola National Forest, for spectacular views of the city of Albuquerque, far below.