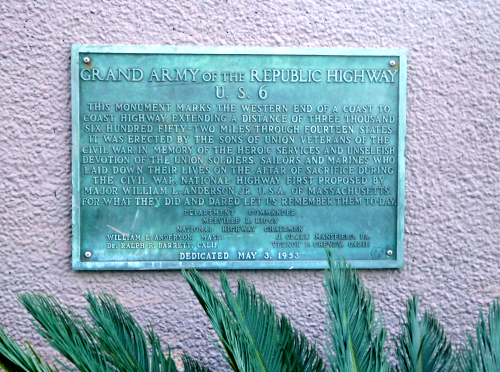 Perhaps because this was the longest US-numbered highway, perhaps because the Grand Army of the Republic organization had adopted it, someone installed a plaque to mark the end of the highway. It was dedicated in May, 1953 and reads, in part, “This monument marks the western end of a coast to coast highway, extending a distance of three thousand six hundred fifty-two miles, through fourteen states.” The occasion was a gathering of five service-related organizations, including the Sons of Union Veterans of the Civil War. The plaque was originally located in front of the Municipal Auditorium, but when that building was demolished sometime in the 1960s, it was moved to the Long Beach Performing Arts Center. It’s interesting to note that neither of these buildings was out at the corner of the Pacific Coast Highway and Atlantic Avenue, where maps have shown the actual end of the route. Because of this, some have theorized other locations for the original end of US-6, such as the interchange of the Long Beach Freeway at Pacific Coast Highway, or the Los Alamitos traffic circle, or even south of the Pacific Coast Highway at the Performing Arts Center. At any rate, it the end of my US-6 Roadtrip!