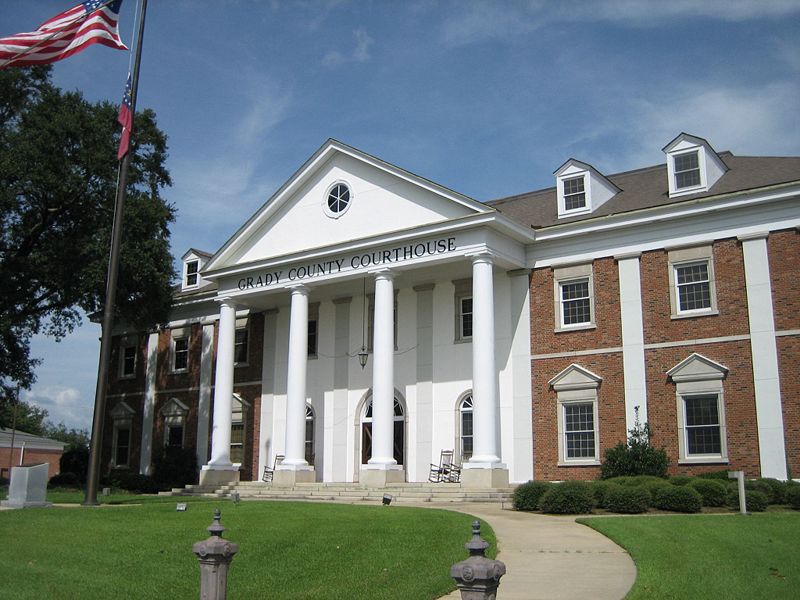 Cairo, Georgia is a town of 9,607 located along US Route 84 in the southwest corner of Georgia. The town is the county seat of Grady County and lies 15 miles west of Thomasville, Georgia and 40 miles north of Tallahassee, Florida. The town has a campus of Southwest Georgia Technical College. The main campus is in Thomasville, which also has Thomas University. Bainbridge College, a 2-year junior college, is in the town of Bainbridge, 20 miles west of Cairo.

The first settlement in the Cairo area was known as Miller’s Station and was a stagecoach stop between Thomasville and Bainbridge. Cairo was charted first as a town in 1870 and then as a city in 1906. It was named for the city in Egypt but is pronounced, “kay-row”. [2]

Cairo is nicknamed “Georgia’s Hospitality City” and “Syrup City”. There is no relationship with the Karo brand of corn syrup even though the pronunciation is the same. The town earned its nickname because it was a large producer of cane syrup from the early 1900’s up until the late 1990’s. The best-known producer in the area was the W. B. Roddenbery Company. Dean Foods purchased the company in 1993 and the Cairo plant was shut down about 10 years later. The Cairo high school football team is known as the “Syrupmakers” and the schools female athletic teams are called the “Syrup Maids”.

Attractions in Cairo include the Roddenbery Memorial Library with an excellent Children’s library and a genealogy collection; The Birdsong Nature Center at 2106 Meridian Road, offering nature trails and bird watching and the Cairo Antique Car Museum on US 84 in town. The Pope museum, 8 miles to the northeast of town, offers more than 200 statues all done my Mrs. Pope Forester. The statues honor heroes from both world wars and others. Even though the museum is now closed, and up for sale, you can still view the statues on your own. Cairo holds several annual festivals including the Rattlesnake Roundup in January, the Great Southwest Antique Auto Show and Rally in May, Pow-Wow in July, Mule Day in November and a Christmas parade each December. In Thomasville there is the Jack Hadley Black History Museum (214 Alexander Street); Pebble Hill Plantation (1251 US 319 South); Thomasville Cultural Center (600 East Washington) and the Lapham Patterson House Historic Site at 626 North Dawson.

Water sports are available along the Ochlocknee River, which flows south of Cairo and at several nearby lakes. These include Lake Lamonia, Lake Miccosukee and Lake Jackson in northern Florida and Lake Seminole 40 miles west of Cairo on the Georgia/Florida border. Seminole State Park is located on the northern side of the lake. Grady County and the area around Cairo are also well known for its excellent hunting resources.

Berlin, Georgia is another nearby For Namesake town.