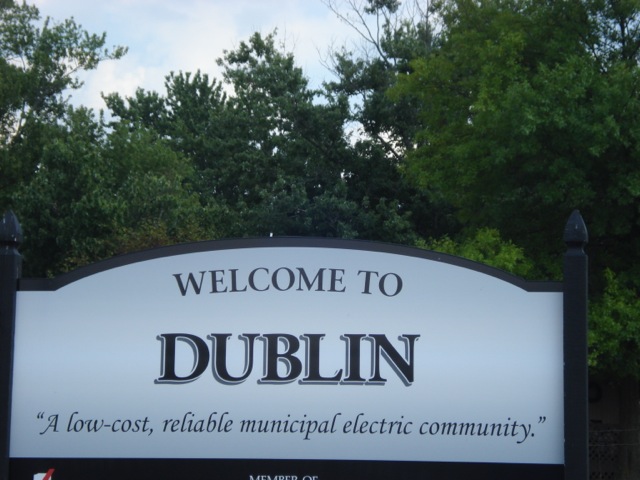 This entry in our For Namesake blog is by request and is about Dublin, Indiana. You will find this village and many many others in my book, "For Namesake"[1] If anyone has any other For Namesake places that they would alike to see in this blog, either from my book or not, please let me know.

Dublin, Indiana is a village of 790 located in Wayne County along Historic US Route 40. It lies 16 miles west of the larger city and county seat of Richmond. The closest college or university is Earlham College in Richmond. US Route 40 is known as “Our National Road” and was one of our nation’s first transcontinental highways, stretching 3157 miles from Atlantic City, New Jersey to San Francisco California. Commissioned in 1926 its path lays along that of several previous highways and transportation routes including the National Road, the Victory Highway and parts of the Lincoln Highway. You can learn about the highway, past and present, at the National Road Welcome Center at 5701 National Road East in Richmond or at the US Route 40 web site [2]

Display at US 40 Our National Road Welcome Center

The village of Dublin was first plated in 1830. A Female Seminary was established there in 1835. The attitude of temperance was strong in the area and there were no drinking saloons in the early days of Dublin. By 1870 Dublin had a population of 1,076 persons. [3] An historical marker located by the volunteer fire department in town indicates that Dublin was the site in 1851 of the first woman’s rights convention in Indiana. Interestingly the name Dublin has nothing to do with Irish heritage, but rather from a hill along the National Road that required doublin’ up of horses to climb in muddy conditions. [4]

The Wayne county area around Dublin has numerous attractions. In Cambridge City you can see the 1830’s Overbeck House, McMaze Corn Maze and visit the Museum of Overbeck Art Pottery. Centerville has the 1840 Mansion House Inn, a Model T Ford Museum, Centerville Historic District and Salisbury Courthouse. In Connersville you can enjoy a ride along the Whitewater Valley Railroad. Fountain City has the Levi Coffin Home, which was a stop along the Underground Railroad. Near Hagerstown you can see the Birthplace of air pioneer, Wilber Wright. The 1871 Isaac Kinsey House known as Beechwood is near Milton. Mount Auburn offers the Huddleston House Tavern, an 1838 Inn along the National Road. In New Castle you can visit the Indiana Basketball Hall of Fame. The City of Richmond offers the Garr House and Farm Museum, the Indiana Football Hall of Fame, Joseph Moore Art Museum, Richmond Art Museum, Wayne County Courthouse and the Wayne County Historical Museum. There are also four historic districts in Richmond and the Madonna of the Trail Statue. Located at 2260 East Main in Richmond this is one of twelve such statues in the country, placed by the Daughters of the American Revolution to honor pioneer women. In the northern part of Wayne County is an Amish settlement in Williamsburg.

Madonna of the Trail in Richmond, Indiana

New Paris, Ohio, located 20 miles east of Dublin is another "For Namesake" town.

Picture Credits : (courtesy of the author)