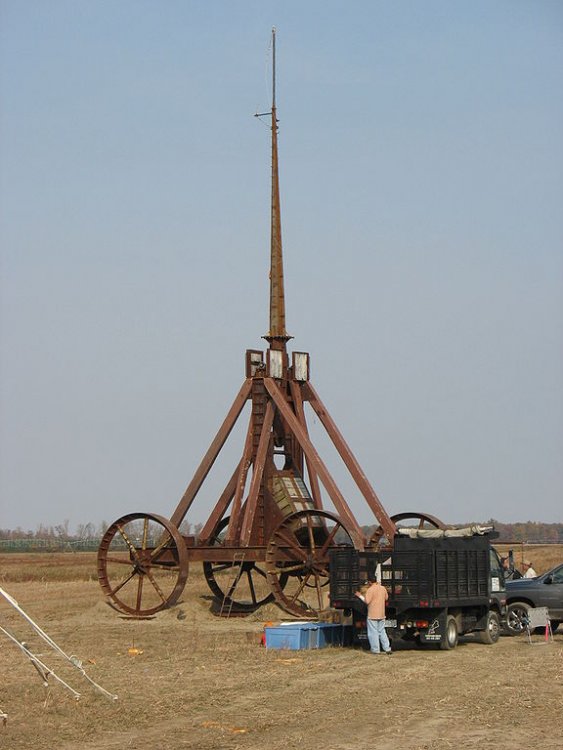 This entry in the "For Namesake" blog is about Georgetown, Delaware. [1] A mere 8 miles away at the Wheatley farm near Bridgeville is the home of the "Punkin Chunkin" contest held every year in early November. This year's contest will be held on Friday November 1 through Sunday November 3. It may be your opportunity to see a world record "Chunk" from a variety of pumpkin throwing contraptions from trebruchet's to air cannons and every thing in between. For more info see the contest website at http://www.punkinchunkin.com If you miss the event you can watch a recap of it on the Science channel on Thanksgiving evening, November 28.

Georgetown, Delaware is a town of 6,422 located in Sussex County along US Route 9 near the intersection with US Route 113. It is the county seat of Sussex county and lies 35 miles south of Dover, the capital of Delaware. Four colleges have a satellite campus in Georgetown including Delaware State University, University of Delaware, Wilmington University and Delaware Technical Community College.

The first settlement in Delaware was the Dutch community of Lewes established in 1631. When the boundaries of Sussex County were established in 1775 it was natural to select Lewes as the county seat. However, this was a difficult location for residents in the western part of the county to travel to in those days, so they petitioned the Delaware General Assembly for a more central location. Since the central part of the county was largely unsettled at that time, a commission was setup to purchase land and to build a courthouse and jail. They did so and laid out a town in a circle one mile across. The county seat was moved to the new town on October 26, 1791 and it was named Georgetown in honor of George Mitchell who was active on the commission. The town thrived until it was divided by the Civil War with sons fighting on both sides and families torn apart by divided loyalties. A war memorial stands on the south side of the current courthouse to honor all those from Georgetown who have served in military service throughout the town’s history. [2]

Georgetown has several historic structures many of which are listed on the National Register of Historic Places. You may view many of them via a walking tour of downtown Georgetown starting at the 1791 Old Sussex County Courthouse. Exhibits of interest in Georgetown include the Delaware World War II Aviation Museum, Nutter D. Marvel Carriage Museum, Treasure of the Sea Exhibit at Delaware Technical Community College and the Elsie Williams Doll Collection. Georgetown has a 19th century renovated train station. The Possum Point Players are a voluntary community theater group in town. Near the community of Bridgeville, just 8 miles east of Georgetown, is the location of the annual World Championship “Punkin Chunkin” contest held each November. In Lewes you may visit the Burton-Ingram House with a small maritime museum, Cannonball House, Delaware Breakwater East End Lighthouse, De Vries Monument, Fisher Martin House, Harbor of Refuge Lighthouse, Maull House, Nassau Valley Winery, St. Peters Church from 1681 and Zwaanendael Museum. You can also take a ferry from Lewes to Cape May, New Jersey. Milford has Mispillion Lighthouse, Parson Thorne Museum and the Riverfront Theater. Milton has the Lydia Black Cannon Museum. Seaford offers the Burton Brothers Hardware Store, Days Gone By Museum, the Governor Ross Mansion and Plantation, Seaford Museum and the Seaford Fire Museum. In Woodland south of Seaford you can cross the Nanticoke River on a cable drawn ferry.

Georgetown is located less than 20 miles from many beaches along the Atlantic coastline. There are several nature and wildlife preserves in the region including Barnes Woods Nature Preserve south of Seaford, Abbots Mill Nature Center and the Dupont Nature Center in Milford, Edward H. McCabe Nature Preserve in Milton and Prime Hook National Wildlife Refuge on the coast, north of Lewes. If deep sea fishing is a favorite pastime, charter boats are available at Fisherman’s Wharf in Lewes. There are four state parks in the area including Cape Heniopen, Delaware Seashore, Holts Landing and Trap Pond State Parks.