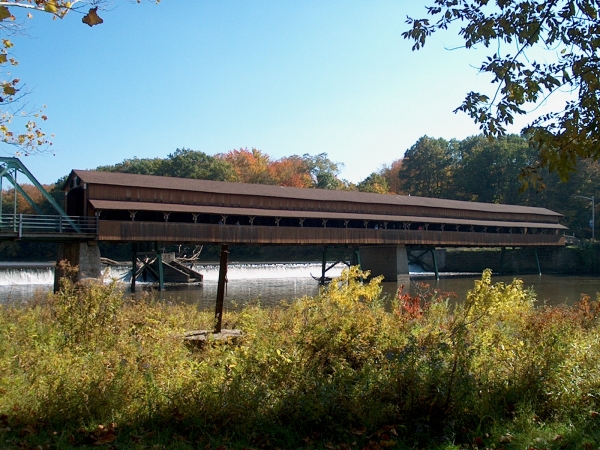 It's summer time and its hot. What better way to cool down then to spend some time at the lake. With that in mind, our Namesake town for this entry is Geneva, Ohio and the nearby summer resort town of Geneva on the Lake. Both are located in Ashtabula County, which has a wealth of museums and sites of historic interest. In addition there are some eighteen covered bridges in the county, including both the longest and shortest covered bridges in the United States. Add the ten or so wineries in the county and what's not to like?

Geneva, Ohio is a town of 6,215 located in Ashtabula County along US Route 20. It lies 25 miles from the Pennsylvania border and 45 miles northeast of Cleveland. Geneva on the Lake is a town of 1,288, which lies 5 miles north of Geneva on Ohio Route 534. The county seat of Ashtabula County is Jefferson, located 10 miles southeast of Geneva. The closet college is Lake Erie College in the city of Painesville.

Ashtabula County was established in 1807 and was the first county created in the Connecticut Western Reserve. The area around Geneva was originally part of Harpersfield Township. In 1816 a small group of settlers decided to withdraw from Harpersfield and create their own community. They named it Geneva for the scenic town of Geneva, New York. With the completion of the Eric Canal in 1825, its location close to the lakefront added to its attraction. In 1829 the first post office was established. By 1840 the population was over 1,200. The Lake Shore railway came from Cleveland through Geneva to Ashtabula in 1852. The community of Geneva was incorporated as an official Ohio Village in 1866. By 1896 the village had a population of three thousand persons. In the early 1900’s Geneva gained its first automobile industry company with the manufacture of the Geneva Steamer in 1901. The company that manufactured this car closed just 3 years later. A few other attempts were made to manufacture automobiles in Geneva; however they too only lasted a few years. The grape industry has played an important part in the economy of Geneva and still does so today. In 1958 having obtained a population over 5000, Geneva was incorporated as an official Ohio “City”. [3]

Geneva on the Lake was Ohio’s first summer resort. It began in 1869 with the opening of the first public picnic ground on a bluff above Lake Erie known as Sturgeon Point. By the early 1900’s it had evolved into a camping and fishing playground for America’s elite. Incorporated as an Ohio Village in 1927; today it is a premier lakeshore vacationland. [4]

Ashtabula County has sixteen museums and sites of historic interest; the following is a sampling of those you may want to visit. The city of Ashtabula has Great Lakes Marine & Coast Guard Memorial Museum, Hubbard House (a northern terminus of the Underground Railroad) and Olin’s Museum of Covered Bridges. Conneaut has the Conneaut Historical Railroad Museum. Shandy Hall, 2 miles south of Geneva, is the 1815 home of Robert Harper and said to be the oldest frame house in the Western Reserve to be preserved in its original form. Hartsgrove has the Presidential Museum. In Jefferson you will find a nice railroad depot and the Victorian Perambulation Museum. In Windsor there is the Servants of Mary Center for Peace featuring a fifty-foot statue of Our Lady of Guadalupe. There are eighteen covered bridges in Ashtabula County including the longest one in the United States, spanning a distance of 613 feet. [1] The warm breezes off of Lake Erie make this region a prime location for growing grapes and there are some ten wineries in the county. [5] Geneva hosts an annual Grape festival in September. Geneva on the Lake is a very popular summer resort with a strip of tourist oriented businesses and parks. To learn about all of the attractions in the area stop by the Geneva on the Lake Visitor Information center at 5536 Lake Road.

Picture is Harpersfield Covered Bridge, at 228 feet in length this was the longest covered bridge in Ohio until the construction of the Smolen-Gulf Bridge in 2008.