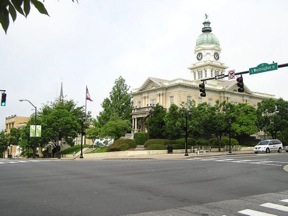 Our Namesake[1] city this time is Athens, Georgia

Athens, Georgia is a city of 115,452 located in Clarke County along the routes of US 29 and US 441. The city lies just 60 miles northeast of Atlanta near the foothills of the Blue Ridge Mountains. Home to the University of Georgia and Piedmont College, it also features a restored Victorian era downtown full of art galleries, shops, nightclubs and fine dining establishments.

Athens officially became a town in 1806 and was built on the banks of the Oconee River adjacent to where the University of Georgia was established in the late 1700’s. The area was named Athens after the city in Greece, by John Milledge, a university trustee and later Governor of Georgia. The city was a significant supply center for the Confederacy in the Civil war and still hosts a confederate memorial located on Broad Street near the University Arch. [2] If Civil war history is a passion for you, war exhibits are on display at the T.R.R. Cobb house at 175 Hill Street and you may pick up a map and brochure to the Heartland of the Confederacy Civil War Trails at the Athens Welcome Center at 300 N. Thomas Street. Athens also boasts the worlds only double barrel cannon. Built in 1863 at a local foundry and featured in Ripley’s Believe it Or Not! The cannon can be found at the intersection of City Hall, College, and Hancock Streets.

Additional historical sites of interest in Athens include the Morton Theater, built in 1910 as one of the first African-American Vaudeville theaters; the First African Episcopal Methodist Church, built in 1866; Athens First Presbyterian Church, built in Greek Revival style in 1855 and remodeled in 1902; and the home of Joseph Henry Lumpkin, the first Justice of Georgia’s Supreme Court. The home was built in 1845 and is on the driving tour offered by Classic City Tours. You can take a tour of historic Athens daily at 2:00 PM starting from 280 E. Dougherty Street.

The University of Georgia also has a rich history. Established in 1785, it was our nations first state charted university. The university was part of the civil rights movement in the 1960’s, admitting its first two black students in 1961. This was a big deal for Athens whose public schools remained segregated until 1970 despite the famous Brown Vs. Board of Education Supreme Court ruling in 1954. Today the university is home to some 34,000 students and boasts a visitor center, arboretum, performing arts center, Stegeman Coliseum for basketball and Sanford Stadium, home to the University of Georgia Bulldogs football team. Holding 91,780 cheering fans it is the nations 5th largest on campus stadium. Athens also hosts Piedmont College, a private liberal institution established in 1897, and Athens Technical College, which offers associate degrees.

Other attractions in Athens include the Classic Center Theater, The Terrapin Brewery and the 40 Watt Club where you may enjoy the Athens music scene. If Art is your thing you might enjoy visiting the Georgia Museum of Art, Lyndon House Art Center, Lamar School of Art and ATHICA (Athens Institute for Contemporary Art). And you won’t be able to miss “We Let the Dawgs Out” which features some three dozen larger than life Bulldogs spread throughout the city. If flowers interest you don’t miss the State Botanical Gardens and ask at the Welcome Center about the Georgia Antebellum Trail. Parks also abound in Athens including Oconee Forest Park, Sandy Creek Park, Sandy Creek Nature Center, and Memorial Park, which has a zoo “Bear Hollow Wildlife Trail”.

Notable residents and natives of Athens, Georgia include: Actress Kim Basinger, Musician Leo Kottke, NFL Football player Dunta Robinson, and Hall of Fame quarterback Fran Tarkenton. Fran went to Athens High School and the University of Georgia where he was quarterback of the Bulldogs and led them to a conference championship in 1959.

Yes there is much to see and do in Athens, Georgia. Discover it all at the “Explore Georgia” Web Site. [3] Athens is included in the Historic Heartland region.