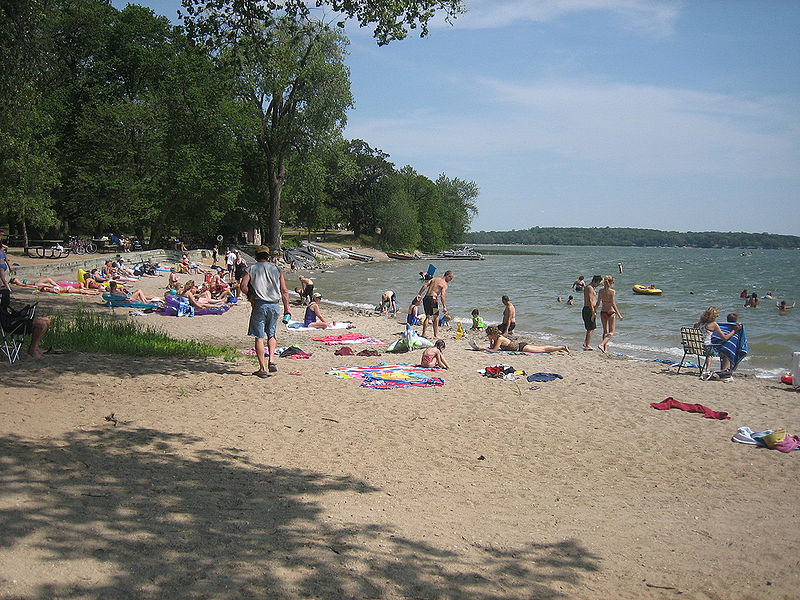 This entry is about New London, Minnesota, a small town with a surprising number of attractions. New London is just one of 14 "London's" that you can read about in my book "For Namesake, a Travel Book - Places in America inspired by Famous World Cities". [1]

New London, Minnesota is a town of 1,251 located in Kandiyohi County along Minnesota Route 9. The motto of New London is “Life, Simply Better”. It lies 15 miles northeast of Willmar, the county seat of Kandiyohi County. The nearest colleges and universities are in St. Cloud, 40 miles to the northeast of New London. There you will find St. Cloud State University, a campus of Global University/Minnesota School of Business and a campus of Rasmussen College. Willmar has a campus of Ridgewater College, a 2-year community college.

A Swedish emigrant named Louis Larson discovered the falls on the Crow River near the site of New London in 1860. Within the next two years he built a cabin there and started construction of a dam and sawmill. In August of 1862, the Dakota Indian War broke out, forcing Larson and other settlers in the area to flee for their safety. In 1865 Larson returned with another settler named Samuel Stone. They rebuilt the dam and sawmill and also added a gristmill. Setters in the area would come to them for lumber, flour and other items. Larson named the small community that had sprung up New London, after New London, Wisconsin. By 1868 the population had grown to about 40 people with three stores and a blacksmith shop. The tiny town became the county seat of Mononagalia County from 1866 to 1870 when it was merged with Kandiyohi County. The original courthouse still stands on Main Street in town. [2] The town mill remained in operation for 73 years until 1938 when the federal government acquired the mill, the dam and the water rights for a fish hatchery, which is now operated by the state of Minnesota. The railroad arrived in 1886 connecting New London to Willmar and St. Cloud. The New London Library was founded in 1887 starting with $50 in books raised by the local students. [3]

For a small town, New London has a number of attractions including the Art House Gallery, Glacial Lakes Bicycle Trail, Kaleidoscope Art Gallery, Little Crow Water Ski Shows, Little Theater of New London, Monongalia Historical Society & Museum and the New London Fish Hatchery. New London is home to the New London Music festival and the New London to Brighton Antique Car Run, both of which are held every August. The small community of Eden Valley has the Amaze’n Farmyard with 19,000 square feet of mazes and farm animals. Litchfield offers the Forest City Stockade, the Grand Army of the Republic Hall & History Museum and the Litchfield, Civic Arena. 7 Miles east of Litchfield, in Darwin, you will find the Darwin Twine Ball, the largest ball of twine in the world made by a single person. Paynesville has the Antique Center, Paynesville Antique Mall and the Paynesville Historical Museum. In Spicer you may see the Prairie Woods Environmental Learning Center and the Spicer Castle. Willmar offers The Barn Theater, J&L Bison Ranch, Kandiyohi County Historical Museum, Memorial Room in Willmar City Auditorium, Mikkelson Falls Flyers Boat Collection, Schwanke Museum and the Willmar Arts Council. Willmar is located at the southern end of the Glacial Ridge Trail Scenic Byway, which runs some 245 miles throughout this part of Minnesota. [4]

There are many lakes in this area of Minnesota; the largest are Green Lake, Lake Koronis, Long Lake, Mud Lake and Norway Lake. Nearby state parks include Glacial Lakes State Park, Monson Lake State Park and Sibley State Park. For winter sports, Powder Ridge Ski Area is located to the east of New London near the community of Kimball.