Adventure Awaits in Peachtree City
Peachtree City, is a master-planned city nestled just 25 minutes south of the world’s busiest airport, Atlanta’s Hartsfield Jackson International airport: ATL. No cars required – Visitors can explore this destination on a golf cart! In the late 1950’s, developers created over 100 miles of paved cart paths that would connect residents and visitors to shopping, dining, resort-styled hotel/conference centers, golf, and other recreation. Bridges, tunnels, and paths wind through natural settings of lakes, parks, and playgrounds. The multi-use path system is also ideal for runners, walkers, and cyclists.
You can even experience a little bit of Hollywood in Peachtree City while aboard The Southern Hollywood Film Tour. The picturesque city proudly shares in the claim to fame of the hit television series The Walking Dead. Peachtree City can also be spotted in high-budget films such as “Sweet Home Alabama,” starring Reese Witherspoon, and “Joyful Noise,” starring Queen Latifah and Dolly Parton. On The Southern Hollywood Film Tour, visit famous film and television sites. From young children to senior citizens, The Southern Hollywood Film Tour will entertain everyone! Recent star sightings in Peachtree City include Michael Douglas, Paul Rudd, and Norman Reedus.
While Peachtree City has continually won awards for being a great place to raise children and to retire – it is also a fun place to visit for a weekend getaway. The Peachtree City Convention and Visitors Bureau is fortunate to partner with two full service hotel/conference centers, plus 6 additional premier properties. From moderately priced rooms to elegant suites, we have the perfect choice to fit your budget. During your visit, let the Peachtree City CVB help you arrange golf cart rental. No matter where you stay in Peachtree City, you can live like a local and enjoy the 100 miles of paved cart paths.
With five distinct villages located throughout the city, each supported by a retail center, Peachtree City is a shopper’s dream! From locally owned boutiques to national chains, you are sure to find something to love. There is also a diverse selection of locally owned
restaurants. From Asian to Southern, the owners and chefs put their heart and soul into providing delicious menus of food and drinks. Along with great food, you also get the welcoming spirit of the neighborhood, staff and owners.
During your stay, be sure to visit Peachtree City’s new brewery. Line Creek Brewing Company is a newcomer to the craft beer scene in the Atlanta Metro Area. Located in Peachtree City, the brewery is quickly gaining popularity in the southeast and around the world. Head brew master Jason Carroll left his position in Ireland’s best Microbrewery, The Franciscan Well, and relocated (with his dog, Lucy) to Peachtree City. Line Creek is open Wednesday thru Sunday and serves as a hub of activity for live music, food trucks, and game watching. The outdoor fire pits offer the perfect setting for laid back, cozy days.
Recreational activities are in abundance in Peachtree City. Within a 5 minute golf cart ride from your hotel, play golf at one of 3 private courses, or tennis at Peachtree City’s USTA Tennis Center. Peachtree City is also a Geocachers paradise. Use GPS technology to find hundreds of hidden caches. Geocaching is fun, easy, and best of all – FREE!
A concert under the stars is another favorite thing to do in Peachtree City! Nestled in the pines and located in the heart of the city, the Frederick Brown Jr. Amphitheater is a summer hot spot among locals and visitors. ‘The Fred’, a 2500 seat outdoor amphitheater, has been a home to international touring acts like Steve Miller, Foreigner, and Gladys Knight.

In Peachtree City you’ll find a community with big ideas and big hearts, a place where Southern hospitality meets resort style living, a town that invites you to learn how much better life can be at 15 mph. 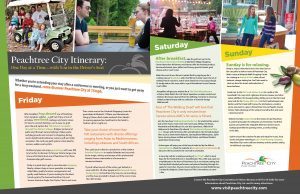