New Exhibit At America On Wheels 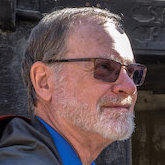 By Dave Reese,
April 5, 2009 in Other Roadside Business / Attractions